Greetings and Merry Meet! Come on in, grab a cup of coffee, tea or whatever else you prefer and read a bit. Check out my pictures. I will be blogging about my stitching endeavors, my every day life with my family, and I'll probably throw in a few witchy things as well! Hope you enjoy. Please feel free to comment and share.
Blessed Be,
Bree 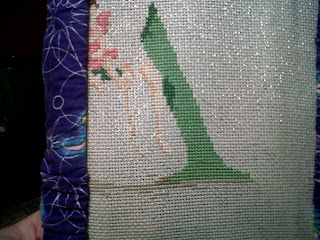 I have been stitching some on the Faerie name piece that I'm doing for Alyssa (Crystal's daughter).  I will upload a picture to show my progress here.  I'm really excited doing this piece.  It's cute!  It is also a really quick stitch.  I am positive Alyssa and Crystal will love it.
Well, in case I don't get back to posting before - Merry Christmas, Blessed Yule and a Happy New Year to ALL!!  May this next year be blessed with good health, peace and happiness.  Much love to my friends and family for all their support during this past year.  **Hugs**
Posted by Unknown at 7:47 AM